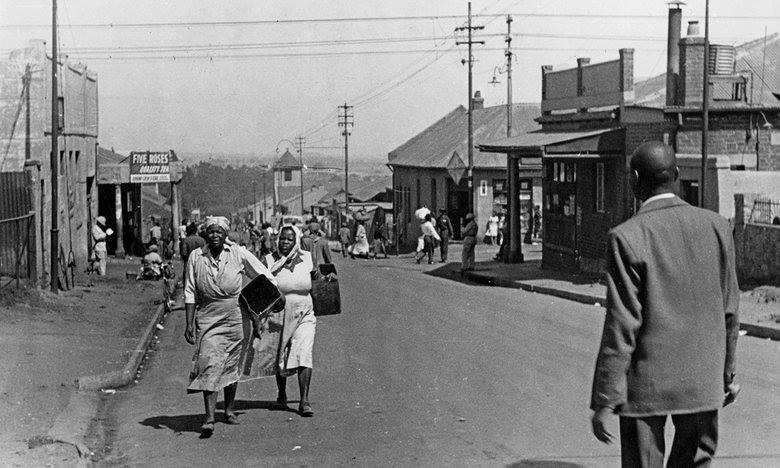 Like the Harlem neighbourhood of New York that ushered in the wave rise of African American art, music, and literature during the 1920s Harlem Renaissance, Sophiatown was the centre of South African jazz culture from the 1930s-50s. Known as Little Harlem, it was the training grounds for jazz legends like Hugh Masekela, Miriam Makeba, Dolly Rathebe, and Spokes Mashiyane. And it was the birthplace of South African swing music, which echoed the popular American swing jazz of the time, and incorporated local rhythms, instruments, and languages, eventually evolving into the Marabi, Mbaqanga, and Kwela styles that are so well known today.

This music was defined by its danceability. If Harlem had ballrooms where band leaders like Chick Webb brought people to their feet, Sophiatown had strings of clubs and shebeens (informal social establishments) that were alive with couples dancing to live music. Photos and video footage suggest that the dance styles recall the Lindy Hop styles that are familiar in other parts of the world, with the incorporation of local traditional dance elements.

The destruction and forced removal of black residents from Sophiatownin 1955, along with other cultural hubs like District 6 and Alexandria, and the suppression of black culture under the apartheid regime, saw the decline of South African swing and the loss of major cultural artifacts. Unlike the American Jazz Age and swing era, which led to the ubiquity of black music and dance in popular culture, South Africa’s swing history is scattered, the puzzle pieces hidden in private record collections, unseen photographs, and personal memories.

Much of the original swing music is forgotten and bands like the Manhattan Brothers, the Elite Swingsters, the Merry Black Birds and the Pitch Black Follies – the pioneers of jazz in South Africa – have faded into obscurity. Consequently, these musicians have not received the recognition, and in many cases the royalties, they are due for their music.