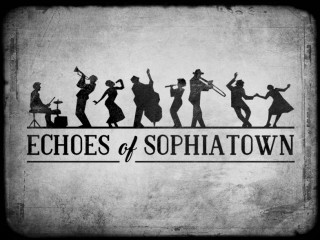 Echoes of Sophiatown is an ongoing Cape Town Swing initiative that arises from an urgent need to preserve, celebrate, and revive a cornerstone of South African heritage. Named for the cultural hub that gave rise to some of South Africa’s most legendary jazz musicians, this project seeks to thread together the music, dance, people, and stories that defined the South African swing era from the 1930s-50s.

Read on to get the some historical background, see an overview of the project goals, and follow the links to the major project components: the music, the artwork, and the stories!

Like the Harlem neighborhood of New York that ushered in the wave rise of African American art, music, and literature during the 1920s Harlem Renaissance, Sophiatown was the centre of South African jazz culture from the 1930s-50s. Known as Little Harlem, it was the training grounds for jazz legends like Hugh Masekela, Miriam Makeba, Dolly Rathebe, and Spokes Mashiyane. And it was the birthplace of South African swing music, which echoed the popular American swing jazz of the time, and incorporated local rhythms, instruments, and languages, eventually evolving into the Marabi, Mbaqanga, and Kwela styles that are so well known today.

This music was defined by its danceability. If Harlem had ballrooms where band leaders like Chick Webb brought people to their feet, Sophiatown had strings of clubs and shebeens (informal social establishments) that were alive with couples dancing to live music. Photos and video footage suggest that the dance styles recall the Lindy Hop styles that are familiar in other parts of the world, with the incorporation of local traditional dance elements.

The destruction and forced removal of black residents from Sophiatown in 1955, along with other cultural hubs like District 6 and Alexandria, and the suppression of black culture under the apartheid regime, saw the decline of South African swing and the loss of major cultural artifacts. Unlike the American Jazz Age and swing era, which led to the ubiquity of black music and dance in popular culture, South Africa’s swing history is scattered, the puzzle pieces hidden in private record collections, unseen photographs, and personal memories.

Much of the original swing music is forgotten and bands like the Manhattan Brothers, the Elite Swingsters, the Merry Black Birds and the Pitch Black Follies – the pioneers of jazz in South Africa – have faded into obscurity. Consequently, these musicians have not received the recognition, and in many cases the royalties, they are due for their music.

With so much history, knowledge, and culture at stake, the the aim of the Echoes project is to pay tribute to the musicians, dancers, and other South Africans who were part of the swing era, and ensure that their legacy lives on for a new audience of jazz lovers, history buffs, cultural aficionados, and swing dancers.

As an organization dedicated to promoting swing music, dancing and culture in the region, Cape Town Swing has endeavored to do this by reviving the music, documenting the stories that accompany it, and incorporating other contemporary artforms that complete the picture (dance styles, photography, visual art, literature).

We consider Echoes of Sophiatown to be an ongoing project which we hope will grow and expand as we learn more and connect with more people and organizations to preserve, celebrate, and revive South African swing. For the first Echoes milestone, which is funded through a crowdfunding campaign with Indiegogo and coincides with the annual Mother City Hop festival in March 2019, we will debut the finished products of three major project goals for all to appreciate:

We will transcribe and translate 30 songs, which will be recorded and performed live by Cape Town’s resident swing band, the Pebble Shaker Jazz Band.﻿

We will curate an exhibition of visual art inspired by the music, culture, dance, and spirit of the South African Swing Era with Youngblood Africa gallery in Cape Town.

We will collect and document the stories behind the songs, dance, events, and experiences of the South African Swing Era, and we will share our findings on our Stories blog.